I have never aspired to live in the in the desert. Growing up in the lush subtropical greenery of Kwazulu Natal with its dry, sunny winters and the oppressive humidity and debilitating heat of its summers, the experience of the changing seasons that I encountered when moving to the Western Cape was a welcome novelty.

When my husband got a job in Dubai at the end of last year I was excited for him and his career prospects, as well as for the financial security it would offer us as a family. I was however simultaneously terrified at the idea of having to live the majority of the year at such extremely high temperatures so far away from everything that is familiar to me.

When he left the kids and I behind in January I was completely overwhelmed at my daunting new role as single parent to 11 month old twins, but I clung to the promise of us joining him a few months later in April. Challenging as the days (and nights!) were, as single parenthood became my new normal, I began to relish these last few months in my beloved Cape Town.  Usually the first to wrap up at any sign of a chill, as the days grew shorter and the leaves lost their colour, I began to embrace the dropping temperatures and the fresh crispness of the air, convinced that I would be gone before winter set in. Wanting to actually feel the cold for as long as possible and eager to absorb every last bit of home, I apathetically strode past the freshly unpacked winter collections that I would usually peruse for sewing inspiration.

As I sit typing this my fingers are a little numb, as I am barefoot and it is the middle of May, and I am still in Cape Town.

Unable to imagine it possible that I could muster the energy and enthusiasm my kids deserved for six more months living in limbo as a single parent, I was initially crestfallen at news from my husband that we would in fact only be joining him in October.

As I came to terms with the situation I decided to focus on the positive: that I had a considerably longer time to enjoy at home and a final winter to experience before moving to the desert. I pulled out the Burda magazines containing jacket patterns that I had loved but decided against making, then thinking that I would have no use for warm clothing in my foreseeable future, and decided that I was going to make this last winter a productive one.

If you have read this previous blog post  then these fabrics, and the combination thereof will be familiar to you. Yes… I did make a jacket out of the exact same fabrics as I made a handbag. There are a number of reasons for this: an inability at the time to go to fabric stores was one of them. Guilt at owning SO much fabric (I have often thought that my hobby is more “fabric collecting” than “sewing”, and what on earth I’m going to do with all of it when I leave South Africa?!) was another. But really, the biggest motivation was that I loved the handbag and found I used it all the time. I figured a jacket with similar attributes would come in pretty handy (pardon the pun).

I used to sew because I wanted/ needed clothes (or so I thought at the time), and would often, despite being a perfectionist, sew things quickly/ cut corners in an attempt to finish and be able to wear the garment as soon as I could. After not sewing at all for almost two years, I find my approach now to be so completely altered. I definitely do not need clothes, my cupboard is overflowing with (albeit 90% homemade) clothing. My social life is non-existent and I don’t go anywhere other grocery stores, so I have no occasion to dress up. I don’t even really like fashion anymore, not that I was ever particularly fashionable. Now I find that I’m gravitating toward more challenging and time consuming projects, and that the most rewarding part of this hobby is immersing myself in the creative process.

I’ve always been a fan of a tailored blazer and have a fair number in my wardrobe. I had anticipated and made complete peace with my body changing forever in the early weeks of my pregnancy. It seemed a fair trade-off for the gift of the beloved beings growing in my burgeoning belly and, although a little sad at the prospect of possibly not being able to wear some of my most loved creations ever again, I really didn’t give it much thought at all. So I was as surprised as the next person (and it really did seem to generate a lot of interest when I went out in public) when, less than a week after coming home from the hospital my body kind of went back to normal. The one area that I did notice was uncomfortable in my old clothes however was my upper chest and ribcage area. I figured that my ribs had probably expanded to accommodate the organs that had been displaced by the cumulative 6 kilograms of baby that I had been carrying, and that it would retract shortly. When many months down the line I still found my blouses and jackets lacking the ease of movement of yore I then speculated that once I stopped breastfeeding perhaps my clothes would be comfortable again.

Alas this was not the case.

Although I still wear many of these items, they’re not very practical in my average day. The action of constantly picking up and carrying between 13 and 26 kilograms will make one quickly aware of an even a faintly tight underarm area. With this in mind I was on the lookout for a boxier cut than the more fitted jackets that I already owned. I wanted to be able to layer up a thick jersey under it and still comfortably be able to handle my kids. This jacket in the Burda 3/2016 seemed the perfect candidate: 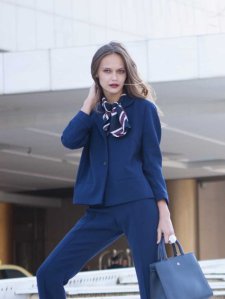 I loved its classic yet relaxed cut and the shaped, slightly cropped sleeve. Unlike the one in the magazine which is unlined, I had decided I wanted to line mine. I didn’t want to devote so much time to making something that I would’t be able to wear for many years, and I figured that this would make for a timeless wardrobe staple.

I had some scraps of leather remaining from a recent handbag project, and was up for a challenge, so I thought I would attempt to use it for the collar and the pocket welts. If I’m honest, there were many moments while cutting these pieces out when I doubted that it would work. Topstitching leather is a nerve-wrecking endeavor, as you only really have one shot at it. Unpicking stitches results in unsightly needle marks that drive a perfectionist like me crazy.  Much to my dismay I did however actually have to unpick a section of the topstitching on the collar. It has been a while since I’ve sewn a jacket with lapels and it turned out that I was a little rusty in the process of the joining of the collar to the lapel. I did manage to topstitch it again in more or less the same place so that the holes aren’t really visible, and I surprised myself by making peace with this. 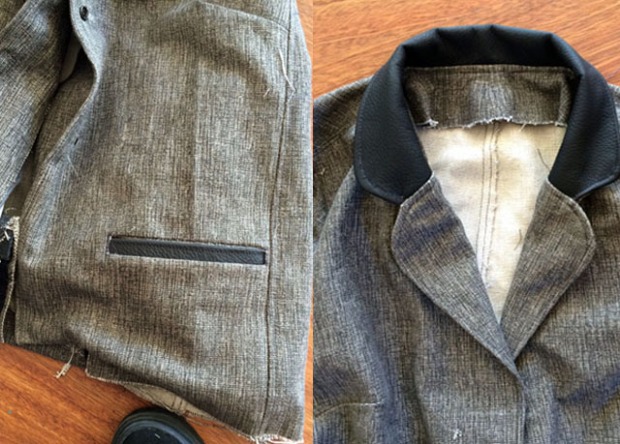 Once the collar and pockets were done I was surprisingly happy with the result, I then decided that leather elbow patches would be an essential addition to this jacket. I had very little leather remaining, but I managed to squeeze out patches which I sewed onto the undersleeve. I still had sufficient checked fabric remaining after my  Scandinavian Crush handbag project to line the jacket, and as a last detail I also added a little welted inside pocket.

I almost abandoned this project on a few occasions,  but I persevered due to the time (a very precious commodity for me right now) that I had already devoted to it. I’m so happy that I did because, save for a few imperfections in construction, it came out pretty close to how I had imagined it. Lately I always feel that I look like a bit of a trainwreck. I’m perpetually covered in bruises, often covered in baby food and/or bum cream and seldom able to sleep later than 4am, so I love how, despite being super spacious and comfortable, the clean lines of this jacket make me feel effortlessly neat and tidy. 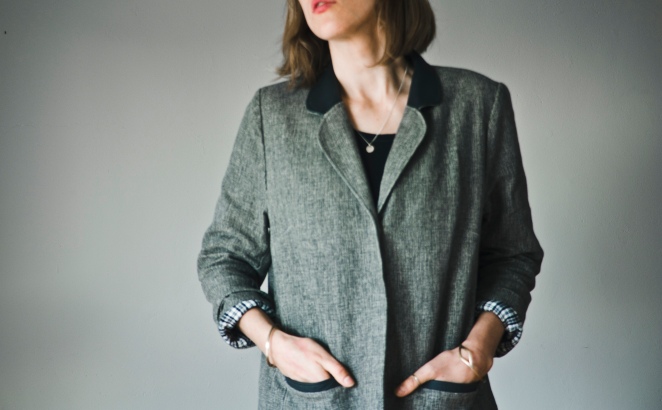 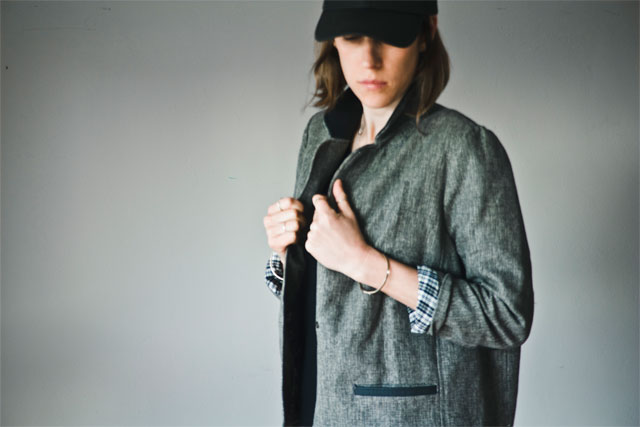 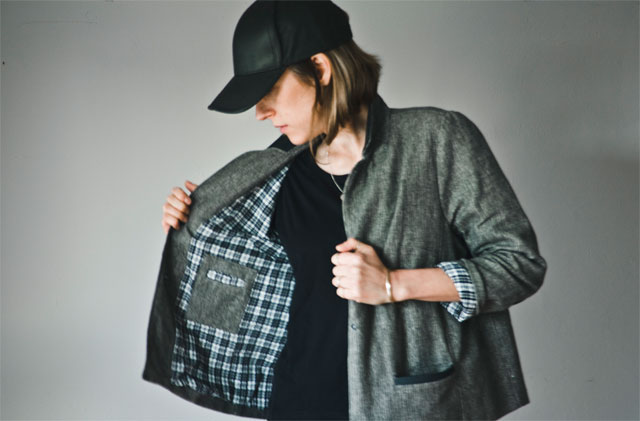 One thought on “Basic Space”

Pretty much immediately after i released #thevetivertop I plunged myself straight into developing #thexanelelongs expansion pack (and ignoring Instagram). But today I realised, as The Xanele Longs tester feedback and photos start to trickle in, that I have not yet taken the time / grid space to acknowledge some of my incredible pattern testers without whom my patterns would probably be ill-fitting and the instructions incomprehensible!

Pretty much immediately after i released #thevetivertop I plunged myself straight into developing #thexanelelongs expansion pack (and ignoring Instagram). But today I realised, as The Xanele Longs tester feedback and photos start to trickle in, that I have not yet taken the time / grid space to acknowledge some of my incredible pattern testers without whom my patterns would probably be ill-fitting and the instructions incomprehensible!
If you have not yet seen it, @handmade_by_celiahann has compiled another exceptional tutorial which will walk you step-by-step through sewing up #thevetivertop .
After making up a few samples I am now pretty happy with the fit of #thexaneleshorts expansion pack. A friend referred to them as thexanelelongs the other day, and I think I may adopt this hashtag, ridiculous as it reads / sounds. I don’t anticipate having to do too many instruction amendments, other than cutting layouts and fabric consumption charts and the like, unless it is preferable to edit all the illustrations to show full length pants instead of shorts? I will post a poll in my stories should you want to help me decide 🙃. So am hoping to get this pants pattern out into the world next month 🤞🏽
Im not sure if any creative project is every actually ‘complete’, and Ive spent the past 2 weeks so immersed in pattern edits that I have lost all ability to judge whether its even good anymore, but I feel like I finally need to release #thevetivertop out into the wild, so it is now available for download in my Etsy store (link in bio), accompanied by a celebratory discount on this and all of my patterns.
I have had a pretty productive week and weekend and am up to date on all my new pattern edits (so far, I am still anxiously / eagerly awaiting tester feedback) so I decided to play around with lengthening #thexanaleshorts into pants, in the hopes of offering this as an expansion pack sometime soon.
Illustrating my patterns cover is always a favourite part of my instruction booklet process. This is for many reasons, the most pertinent being that it’s a very welcome break from all those hours spent staring at my laptop or hunched over my sewing machine / pattern table. Also I really really love to draw, but never make time for it in my busy life as it seems like such an indulgent activity (much like watching TV but, given the opportunity and time, i would certainly choose the former over the latter). The other, more exciting reason is that it indicates that I’m nearing the end of the process and about to release many months of work into the sewing world (always equally parts daunting and exhilarating).
Loading Comments...
%d bloggers like this: