I try to imagine that nobody actually reads this stuff that. I am sure that 99% of the time that is true. You’re gonna scroll down and look at the pictures right? That’s what I mostly do, that’s what everyone does… or so I thought.

Lately however, people have started commenting on my posts. And a lot of the time these comments  make reference to something that I have written, which would suggest that there are actually people actually reading this stuff?!?

So now I’m thinking “Oh crap!”-people are seriously taking the time to read my long-winded (often nonsensical) drivel. I have been finding this to be quite an intimidating thought, and one that is a little inhibiting. As I type I am overthinking each sentence, and I will definitely endeavour to be more focused and concise from this post forth. Let’s see if I can reign myself in.

In the midst of all the daily demands that 2017 has presented me with, I  have been really battling to find any time to do any “recreational sewing”. I’ve been so focused on making loads of new patterns (and reworking some of my old ones) in the hopes of releasing at least 2 by the middle of the year. And, although I freaking love the creative process of pattern making and garment development, it is proving to be a very drawn out one now that I can only devote about an hour and a half to it each evening (after an exhausting day of work, child care, housework etc), and I often do pine for the instant gratification of mindlessly knocking something up on a whim from an existing pattern.

I had noticed the culotte/ cropped wide leg trend bubbling under the surface for a while now, but I didn’t really pay it much attention. Having been super self conscious of my skinny ankles and calves for as long as I can remember, I did not see myself as a candidate for pulling off this look, certain that such a voluminous hemline would only serve to emphasize these areas of insecurity.

Then I noticed a number of incredibly chic looking ladies sauntering around Cape Town, unperturbed by the summer heat in these Flow Culottes by wonderful South African designer Jane Sews. Something about these pants caused me to reevaluate my thoughts on this silhouette. So much so that I was quickly compelled to make myself a pair of cropped, flowy pants, and I carved a little break in my strict, self-induced schedule to do just that.

These pleated Burda pants  that I blogged about a while ago ended up being one of my most loved garments, so I thought I would see what Burda had on offer in this kind of silhouette. They actually have made a considerable number of culotte patterns over the past few years, but these ones really spoke to me. I didn’t want anything too wide (see above about ankles), nor exaggerated, and these seemed the perfect combination of my style and this style that I had not yet attempted to wear. 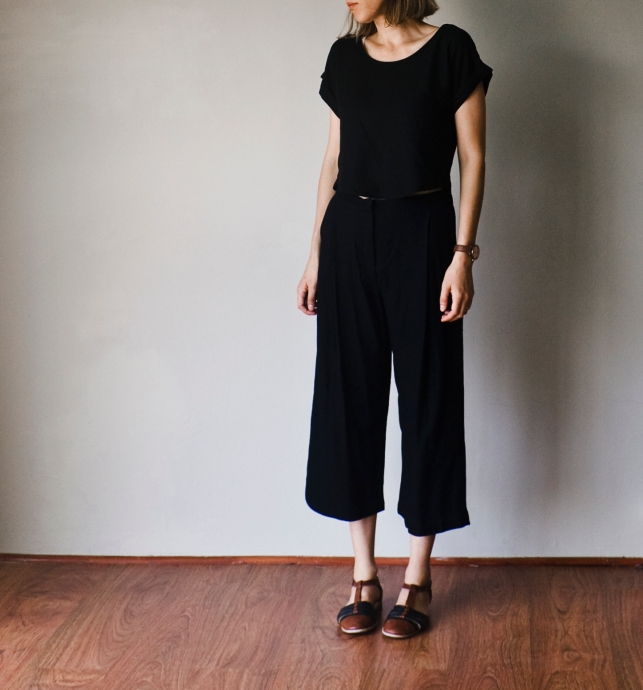 I made them in a drapey black viscose twill, and I was instantly obsessed! They are such a comfortable and wearable silhouette, and its so great to be able to cover my bruised legs (toddlers!!) and still remain cool in the heat. I did not change that pattern at all, excepting that I shortened the hem by 3cm’s.

Two weeks after making these pants I was itching for another pair (I’m a serial pattern repeater and they were such a quick and easy sew). So I made use of a khaki viscose blend that I had in my stash. It was given to me so i’m not 100% sure what exactly it is composed of). It also had a good drape, but is a little weightier than the black that I used for my first pair. 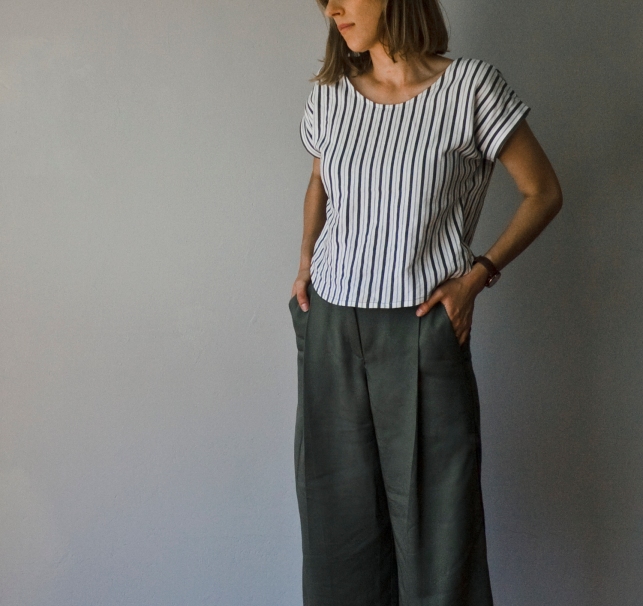 I love this pattern and highly recommend it and I would make more of these if I had the time! If you think you can’t wear this trend then I encourage you to give it a try. There is no shortage of awesome patterns and inspiration on social media, and you may just surprise yourself and fall in love with culottes like I did. I hope I managed to keep this post short and focused like I intended it to be…ah who am I kidding, you stopped reading this ages ago.

23 thoughts on “The Long and Short of Things”

Woke up to double gingham gorgeousness in this ridiculously cute matching set by @under.the.elms featuring #thexaneleshorts , as well as this pretty darn perfect #thevetivertop by @toiles_and_trails ❤️

Woke up to double gingham gorgeousness in this ridiculously cute matching set by @under.the.elms featuring #thexaneleshorts , as well as this pretty darn perfect #thevetivertop by @toiles_and_trails ❤️
I’ve had a lot of people asking me lately how I feel about Reels or, more particularly, how I feel about changes in Instagram and how Reels affect the ever-enigmatic algorithm. To be honest I do not have much knowledge on the topic (seems some people think I know what I’m doing over here when, truthfully I’m pretty clueless). A quick google search did not yield much information so I gave up on trying to educate myself on this topic. This line of questioning did however make me curious to attempt my first reel, and I actually really enjoyed the process. Except for the fact that, being a business account, I was unable to add the music that I would have liked to add.
The Vetiver Top Pattern Expansion is now available in my shop. This pattern expansion gives you the option of adding long sleeves and / or a Peter Pan Collar to your Vetiver Top. If you, like me, have found yourself regularily reaching for your Vetiver Tops throughout the warmer months and have wished for a winter-friendly version of this pattern, then this expansion is for you.
I’ve been much more prolific around these parts, incase you hadn’t noticed. It’s been a super rad past few months for me as I’ve been feeling like I’m finally MOVING FORWARD after so many years of stagnation, my creativity tethered by an endless to-do list that seemed always to be dishearteningly insurmountable to me. It’s been beyond incredible to have @handmade_by_celiahann join my team and she has been more than picking up all of the slack that Ive been unable to manage by myself over the past few years.
My relationship with #theforsythedress over the past 5 years or so since I launched it as my first PDF sewing pattern has been somewhat complicated….
Oh the lunacy of sewing a princess-seamed garment in checked fabric! It was, at least, an exercise in overcoming sewing perfectionism
Loading Comments...
%d bloggers like this: